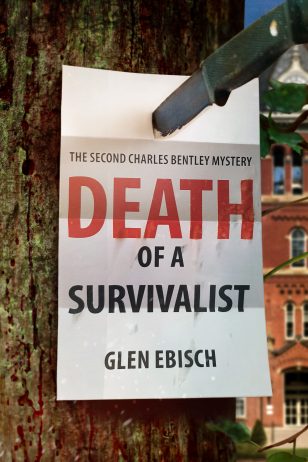 Charles Bentley, semi-retired professor of English at prestigious Opal College in the Berkshires of Massachusetts, is confronted in his office one day my Sebastian Locke, a survivalist living in upstate Vermont who is on campus to give a speech. Locke is concerned because his daughter’s history professor approached her in an inappropriate way. Bentley has the daughter in class, so Locke has come to him for information on this professor. Charles gives him some advice, and they also have an intense discussion about Thoreau. Charles decides to attend Locke’s presentation that afternoon, but discovers that Locke has been stabbed to death. Charles helps his girl friend, Lieutenant Joanna Thorndike, dig into the case, and they quickly find that there are a number of people who may have wanted the hotheaded survivalist dead, including his ex-wife and his current romantic partner.
While all of this is going on, Charles is also trying to help his daughter deal with the breakup of her marriage to her potentially violent husband. He is also coping with his own deepening relationship with Joanna, and the death of his father. Charles discovers that even when you’re trying to solve a murder life can get in the way.

Charles Bentley, a professor of English at prestigious Opal College in the Berkshires of[...]
View Book Details

To Die for Art

When Charles Bentley finds the body of his next door neighbor on her kitchen[...]
View Book Details

The Deadly Road to Enlightenment

Charles Bentley is celebrating his seventieth birthday with his family at a local restaurant[...]
View Book Details