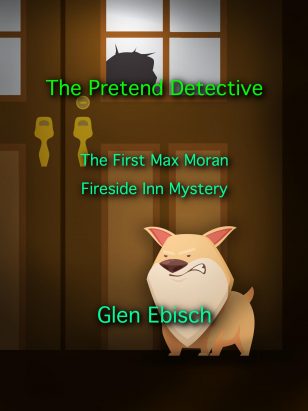 Max Moran looks like Superman but has the personality of Clark Kent. People expect him to take charge, but he’d much rather be a follower. Woman expect an alpha male, but he’s more the best friend of the romantic lead. This disconnect between his looks and his personality has caused him problems with his family, his girlfriends, and his attempts to develop an acting career in New York. Now he is managing his Uncle Edward’s inn in the resort town of Lighthouse Point along the New Jeersey Shore, and life is quiet, just the way Max likes it. Then a dead body turns up in one of the rooms, and it turns out that the man was a private detective working on a case. Max inherits the man’s dog and more when an attractive woman shows up at the inn saying that she was the dead detective’s client. She persuades Max that she desperately needs him to take over the case. So Max finds himself taking up his most challenging role yet, that of The Pretend Detective.

Other Books in The Max Moran Fireside Inn Mysteries:

When one of the guests at the Fireside Inn is murdered, Max becomes a[...]
View Book Details

Sing a Song of Murder

Max Moran, who looks like a sexy Superman, but has the personality of Clark[...]
View Book Details